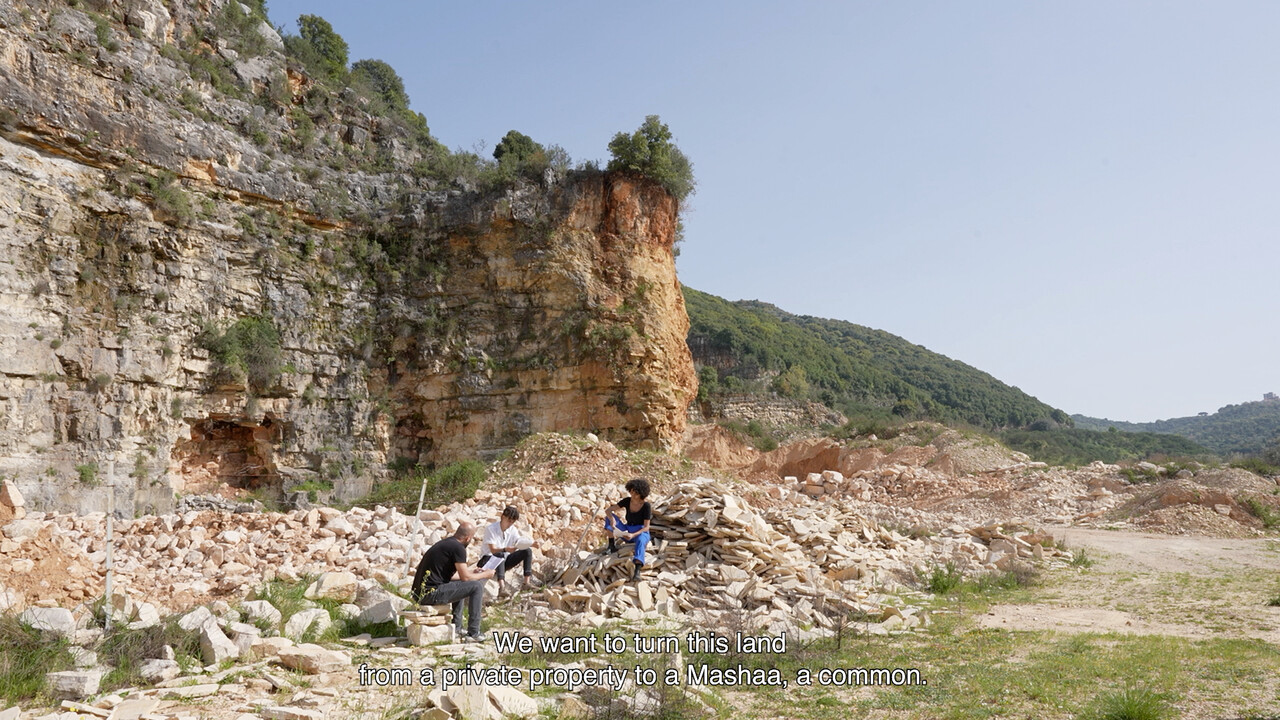 The Mosaic Rooms presents the first public London solo exhibition by Marwa Arsanios surveying her interdisciplinary practice. The exhibition reflects on colonial and ecological violence, and the impacts of urbanism and capitalism. Arsanios’ expansive projects seek alternative ways to collectively resist and reclaim knowledge, and to practice a more harmonious relationship with the land.

The exhibition opens with a presentation of the artists reading room. Visitors are invited to sit in the reading room and engage with texts together, as part of the artists longstanding interest in language, politics, and collaborative processes. Here, Arsanios has curated a selection of books to initiate discussion on alternative visions to mainstream patriarchal ideologies relating to ecology, politics, anarchist and feminist thought. Visitors and programme collaborators are also being invited to leave texts to share throughout the exhibition and the reading room will be activated through different programmed reading sessions.

In the main room the works reflect on the systems of capitalism, and the lasting effects of the neo-liberal boom on both environmental and socio-political factors. Falling is not collapsing, falling is extending, draws on two instances to critically reflect on the effects of rapid capitalisation and urbanisation in Beirut since the 1990s. Arsanios reflects on the real estate drive and reconstruction of Beirut’s city centre following the civil war. In parallel the film looks at the rubbish crisis of 2015, where thousands of tons of garbage filled the streets. The work also consists of Resilient Weeds, a botanic archive of drawings of plants and animals that can survive the toxic levels of these sites.

The large textile work on display came out of collaboration during the Who is Afraid of Ideology series of films with the women of the village of Jinwar in Northern Syria. The design by the artist was an attempt at translating the vision of the village described by the women themselves. Embroidery, a local skill, was used by Manal Mohammad, Khansa Nouh, and Maha Jermani from Sama organisation to turn the design into a tapestry.

In another video installation, the film Amateurs, Stars and Extras or Labor of Loveuses the blur between stage and backstage to reflect on the labour of underpaid or unpaid domestic workers. Mainly performed by women who are often the fundamental actors in domestic economy, the film looks at the invisible work of care as experienced by domestic workers in different sites and geographies. Shifting between TV sets, behind the scenes, castings and acting, the film interrogates the role of extras in film as silent actors in relation to underpaid domestic work. It highlights the radical potential of collective political projects to affect change through the voices of syndicalists from the domestic workers’ syndicate in Mexico City.

The exhibition concludes with the fourth chapter of Who is Afraid of Ideology? series Reverse Shot. The film departs from a collaborative project that is attempting to shift the status of a private land in the North of Lebanon to a common or a social waqf. The aim being to advance the right of usership over ownership. The land would only be used by people who do not own a land for agricultural purposes. The film follows this process and adds to it a reflection on the way land as a living object inherently resists property. The connections between the geological, historical, legal and agricultural invites an opportunity to imagine renewed connections with the earth.

As part of the exhibition, a selection of posters by the artist will also be installed off site in public locations throughout London from October 10 until October 23, 2022.

The public programme accompanying the exhibition features artists, activists, and scholars whose work and research explores how to organise with and from land as a focal point. Full programme can be found on mosaicrooms.org.