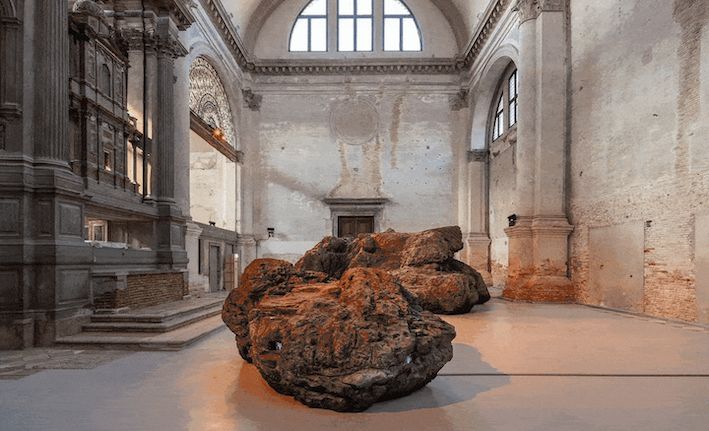 TBA21–Academy presents two new commissions by South African-born Dineo Seshee Bopape and Portuguese-born Diana Policarpo for the 2022 exhibition program in Venice. TBA21–Academy’s program at Ocean Space proposes a processual reading of nature’s structures and cycles in relation to art and culture to reclaim space for speculative thinking about our ecological future. In the second year of the exhibition cycle The Soul Expanding Ocean at Ocean Space, curated by Chus Martínez, Diana Policarpo and Dineo Seshee Bopape give presence to the Ocean and the stories it holds.

The Soul Expanding Ocean #3: Dineo Seshee Bopape
Ocean! What if no change is your desperate mission?

“Sometimes, works have no tangible origin, and yet their substance emerges and becomes real long before they stand in front of you. Back then it was a magic afternoon, in the Solomon Islands, where a small group of friends was swimming, playing, filming on the shore. (...) Rain started to pour down. In an instant, the rain and the Ocean merged. With our heads underwater, we could see the drops sinking into the Ocean and the Ocean reaching out to the skies. The salty water body muffled the music evoked by the raindrops falling. We could barely keep our eyes open: drops, salt, tears, joy... This could have been a dream.” —Chus Martínez

Dineo Seshee Bopape’s work begins with a journey to the Solomon Islands, and from there she moves on to plantations on the Mississippi, to Jamaica, and then back home to South Africa. Bopape’s approach merges magical inquiry, historical curiosity, traditional wisdom, a sense of/for illusions, imagination and hope in order to create an operation on the post-post-colonial agency in conversation with the Ocean (being).

The imaginary hand that peacefully touched the Ocean in that moment may or may not belong to an existing body, or to the spirits that appear as abstract forms in your digital devices. This newly produced work proposes a tight embrace. True, we want to research, question, answer, solve, sustain the demands of the Ocean. But first, we might start by envisioning a life in which the Ocean is intrinsic. Dreams, songs, spirits, imaginaries are carried by water.

The Soul Expanding Ocean #4: Diana Policarpo
Ciguatera
How do rocks know about history? How do species communicate about time? For her newly commissioned work at Ocean Space, Diana Policarpo is developing a multimedia installation, using film and audio to enhance a certain sense of presence while capturing her own research process. Taking her point of departure from a research trip to the Portuguese administered Ilhas Selvagens (Savage Islands) in the North Atlantic Ocean, Policarpo creates a case study of mapping colonial histories through tracking natural biodiversity.

“Diana Policarpo engages in a very personal study of a Portuguese archipelago—the Ilhas Selvagens. Small as they are, these islands hold a symbolic and also an ecological importance. What might seem tiny and remote to humans is not so for algae, birds, fishes, and rocks that speak of the geological formation of a continent, and the currents that determine both the course of the seasons and the survival of many species. Diana Policarpo decided to bring the conversation with these islands to Ocean Space. As if to say: We may engage in a dialogue with all the territories that humans want to take from others—human and nonhuman. A conversation about the Western colonial ways of addressing genesis, the origin of beings, events, and things, as a way of gaining rights over them.
The animated science of art is an arduous method that weaves together many different artistic languages, in order to erase the possibility of an ‘opposite.’ There are no opposites in nature, no opposite sex, no opposite of the real. To surpass this dualism we need new beliefs, new movements of thought capable of stopping further damage and wars to come. We are placing an intention here for you to understand and enjoy an immersion, one created to remedy the limitations of humans in retraining our habits—to combine the skills we have learned in unpredictable, fertile, positive ways.” —Chus Martínez