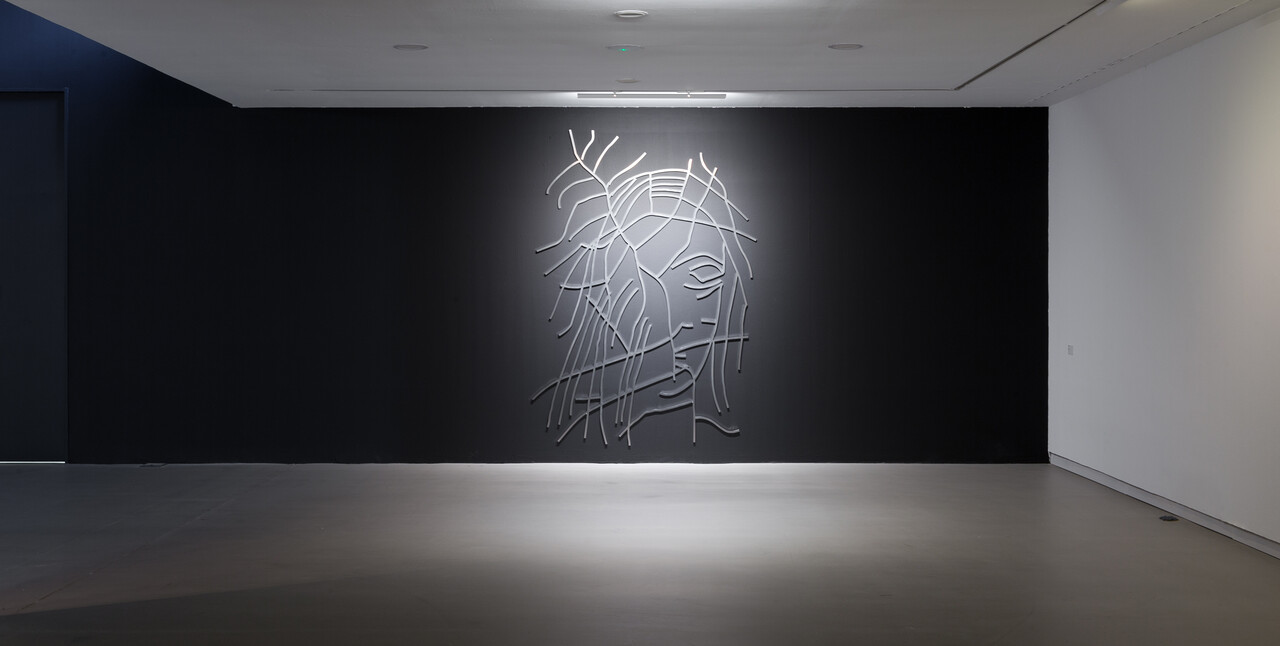 Ever since the early 1980s, Jutta Koether (Cologne, 1958) has been developing an artistic practice grounded in painting and intersected by writing, performance and music, practices that serve to make her undisciplined when it comes to art historiography and seeking her own genealogies. Koether’s work approaches the history of painting in a stealthy, disobedient manner, reclaiming the medium as place for an artistic practice that is informed by feminism.

Black Place brings together works in a variety of formats and materialities, from large-scale canvases in which the artist reappropriates works by artists such as Botticelli orRubens – made on the ground in a manner almost akin to performance in places where they were initially exhibited with a sense of immediacy in their making – to medium and small format works on various formats in which Koether often applies other materials, thereby exceeding the limits of traditional painting, influenced by DIY and punk.

Although Koether’s work has always featured the history of painting as a subject, her strategies of appropriation have varied, as has the way in which text is introduced into her work. Her focus on various expressions of popular culture is obvious from her earliest works, as well as on other issues related to history and the very logic with which she constructs painting.

Black Place is her first exhibition in Spain since 1987, when she jointly presented her work alongside Rosemarie Trockel and Bettina Semmer in an exhibition that was staged at La Máquina Española in Seville. She travelled to New York for the first time in that same year and has lived there ever since 1991, combining this with her time in Berlin and Hamburg, where she teaches at the Hochschule für Bildende Künste (HFBK).

Jutta Koether was born in Cologne in 1958. She studied art and philosophy at the University of Cologne and also completed the Independent Study Program at the Whitney Museum of American Art in New York in the early 1990s. Museums and institutions such as Museum Brandhorst in Munich, Mudam Luxembourg, PRAXES Centre for Contemporary Art in Berlin, Moderna Museet in Stockholm, Van Abbemuseum in Eindhoven, Kunsthalle in Bern, the Academy of Fine Arts in Vienna and the Kölnischer Kunstverein in Cologne, among others, have dedicated monographic exhibitions to her work.

In addition to her work as an artist, Koether has written for art and music publications such as Spex, Eau de Cologne, Artforum, Texte zur Kunst and Flash Art, and she is the author of several books, including f. (1987). Koether has also collaborated on various projects with the Reena Spaulings collective and with Rita Ackerman, Tony Conrad, Kim Gordon, John Miller, Steven Parrino and Tom Verlaine, among others, in her musical performances. She has been Professor of Painting and Drawing at the University of Fine Arts Hamburg since 2010.