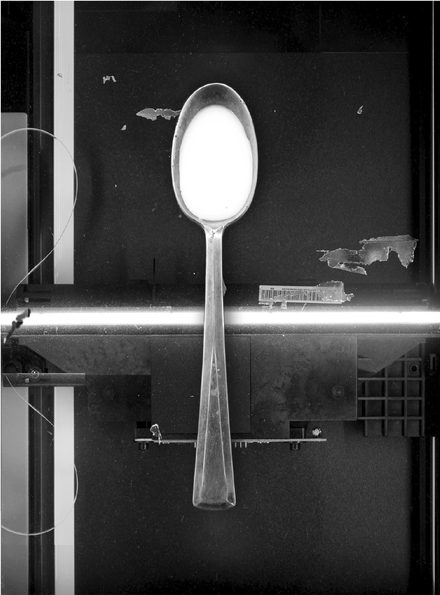 Horizont unfolds through a series of juxtapositions of objects and interventions, exposed by the pulsing light of a scanner beam as it glides across the picture plane. Clips are sequenced to pan laterally as the light travels mechanically back and forth, illuminating an array of artefacts.

Horizont is equally an anthropological and poetic pursuit. Its source material reflects artistic and archivist impulses, drawn from the everyday and engaging a range of themes which include ecology and destruction, history and digitization, violence, fertility, drugs and economics. At times, the specificity of things and their connotations – a lit cigarette on one screen and a drained coffee cup the another – slip into affective, evocative relationships. In combinations like a smiley face on the one side and a lonely, writhing maggot on the other, vitality meets vanitas*. The two screens face each other as if in conversation, playing semantic tug of war between sense and nonsense, humour and solemnity, and engaging both the cosmic seeker and the speculative analyst.

Mantra-like, the work’s soundtrack instils a hypnotic pulse that drives a polyrhythmic grid into which viewers can drift and return, observe and associate. Its immersive experience makes the lapses more apparent, too, for example when Astali / Peirce video call themselves from a smartphone placed on the scanner and reveal themselves alongside their rigged machinery, or when the scanner scans itself in a single, cascading image. Audio and visual glitches merge with intentional sleights of hand and inflect disruptions in authorship with a sense of reflexivity, even intimacy. They tease the notion that the self might hinder a more intuitive kind of understanding and also raise questions of how willingly we attribute and construct meaning, even in the most fortuitous and fleeting of constructions.

The scanner in Horizont serves as frame, stage and platform for these intrapsychic explorations. It offers the artists form and function: a site of bureaucratic, automated toil as much as ritual. For a culture addicted to the production of self through ever-changing modes of consumption, Horizont offers a sweeping inventory of the now. Post-mortem, it looks down and out, back and in, in order to cast collective sightlines forward. In their complex layering of histories and meanings, Astali / Peirce deliver both an index of the flawed machine in which we operate and a comment on our role in sustaining it.