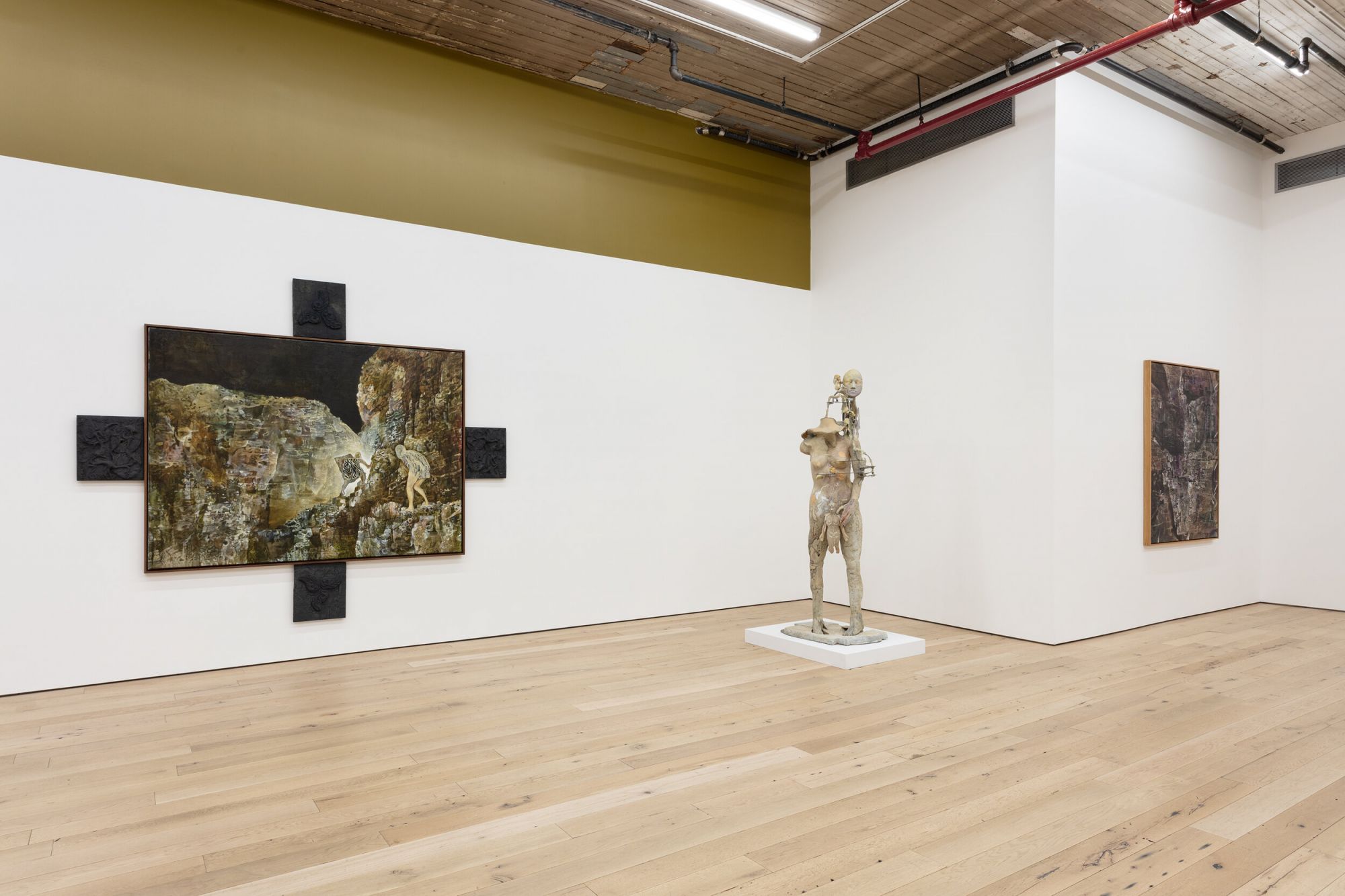 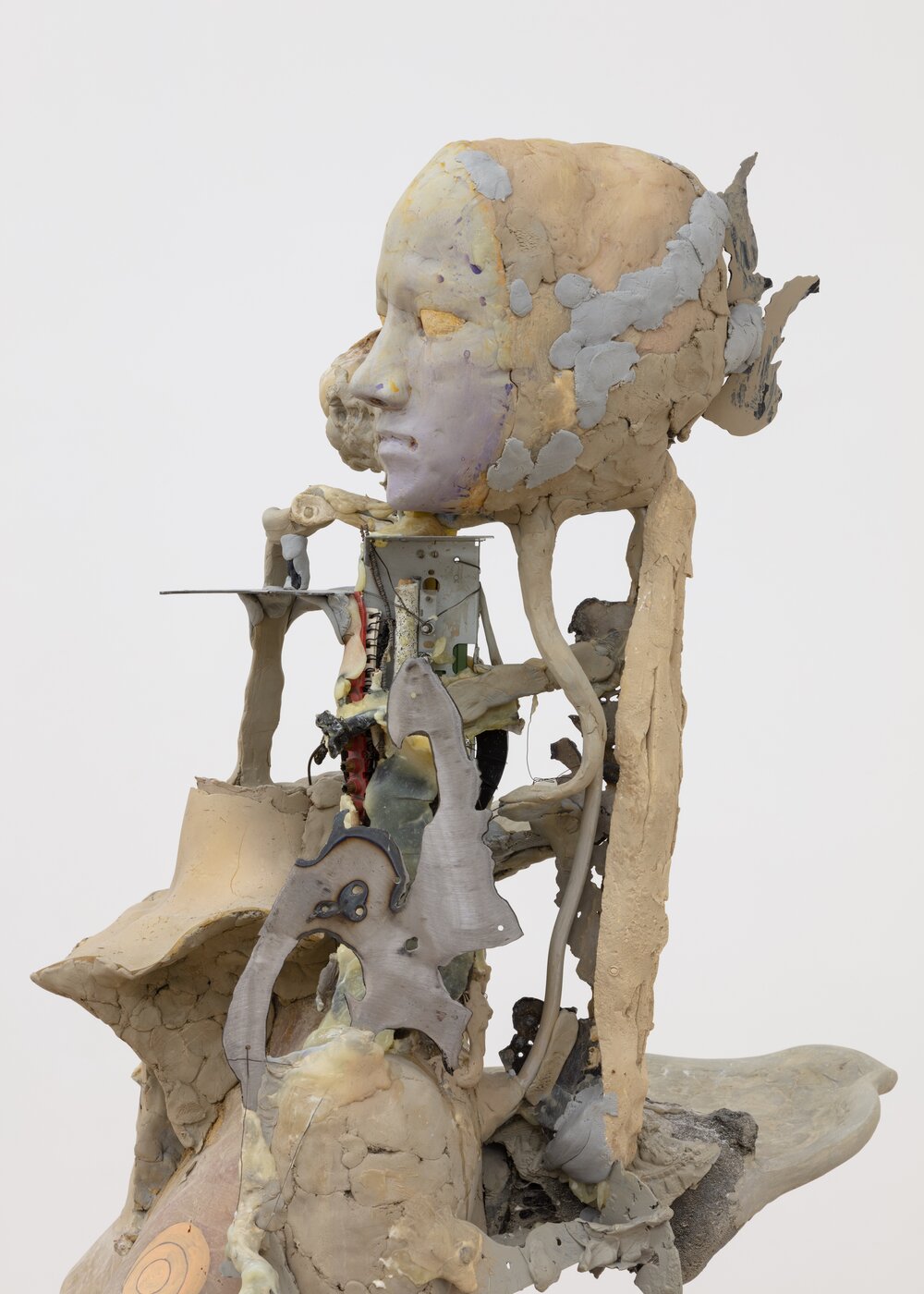 Martos Gallery is pleased to present its first exhibition with TARWUK, the collaborative duo of Bruno Pogačnik Tremow and Ivana Vukšić. Originally from Croatia, now based in New York, the artists have been working together since 2014 under a shared name meant to signal an entwining of identity towards a common purpose: four hands, one mind. Their often visceral work takes the form of figurative—at times disfigurative—sculpture, as well as paintings and installations, that reflect and embody an emotionally-charged undertow, the lives humans carry within them over centuries from one generation to the next.

TARWUK mine this genetically encoded information in works arising from their place of origin, the Balkans, in particular from still palpable memories of their youth during Croatia's 1991-'95 struggle for independence (when they would have been between ages ten and 14), a conflict that left some 140,000 dead. Their life-size figurative sculptures may be seen as autopsic bodies, while at the same time as conjuring sites of reanimation. In this their work is alive in a space between antiquity and the future, but a future ruin that may offer, conversely, a chance for rebirth from loss. They invite us to join them in the process of unearthing what lies beneath. We find fragments of discarded technology and sense traces of the ravages of war, while great beauty and transcendence are evident in every craggy crevice and crypt. Their invented language, in the titles of their shows and objects, inscribed within some of the paintings, at times "tattooed"

into the figures, is a form of inhabited poetics that suggests ritual and incantation. As with other contemporary artists who may be thought to "time travel," TARWUK's work is both from the present and elsewhere. Equally true for the ravaged classicism of Huma Bhabha, Justin Matherly, and Andra Ursuta, in order to determine an object's initial emergence perhaps only carbon dating would definitively settle the matter.

Art from earlier periods yet resonant comes to bear upon our reading of TARWUK’s sensibility, having clear kinship with the poignancy of Medardo Rosso's heads, Paul Thek's reliquaries of the 1960s, the fantastic realm of H.R. Giger in his interconnection of machines and the human body, as well as Robert Smithson's notions of entropy and his love of sci-fi. TARWUK's sculpture can be imagined as corporeal earthworks set against the cinematic backdrop of Alien, Road Warrior, and Blade Runner. (Who would be their ideal fictional patron? Imperator Furiosa, Charlize Theron's character in Mad Max: Fury Road.) TARWUK's distinctly material approach, with a re-purposing of found and natural materials—wax, scrap metal, rope, pigments, wood, plaster, salt, and dried flowers—aligns them with arte povera and its merging of art, nature and the everyday world we inhabit, teasing out its poetry, refining its poignant, gnarly shards.

Through an investigation of the archaeological and dystopian, a probing of the layering of civilizations, sifting its strata, its trauma, TARWUK arrive at a body which, in its exhumation-imagining, is also a landscape to explore: a broken shoulder is a craggy mountain ridge, the slender neck its slope. Our eye glides along its contours, its fragility. An exquisite profile, behind which is revealed a cranial chamber, a head turned in on itself, simultaneously identifies their collaboration as an ongoing game of exquisite corpse. TARWUK excavate a time long gone, not yet arrived, and somehow already with us.

The paintings often present us with fantastic, near-ectomoplasmic landscapes. Even when small figures explore or inhabit them, an outside location appears interior, a honeycombed labyrinth ambiguously above- and underground; a world turned inside out. Are these figures in fact inside a larger body? Infused with a milky, spectral light, this is a haunted realm. To the largest of TARWUK's paintings, the addition of four cast elements—pointing North, South, East and West, and recalling the sculptural reliquary framing of Robert Morris's late '80s works—creates a cruciform object by way of darkened ikons. Another painting suggests a vaporous winged visage rising up in nocturnal space, both fierce and fearful, improbably ossified and gossamer: stone become dust. Their most time-traveled canvas, as if inverted from Renaissance cartography, made animate with magical orbs, anchored by a radiant sigil (in between Russian avant-garde and the Orphic art of Robert and Sonia Delaunay), can be thought of as a map that may point the way beyond our own dark times. One disc bears a Latin inscription:

TARWUK have exhibited their work over the past seven years in personal shows in Berlin, Vienna, Zagreb, at the Museum of Modern and Contemporary Art in Rijeka, Croatia, and most recently at 15 Orient in New York. They are currently in residence in the Sharpe-Walentas Studio Program. In October 2021 they will present an exhibition at the Collezione Maramotti in Reggio Emilia, Italy.