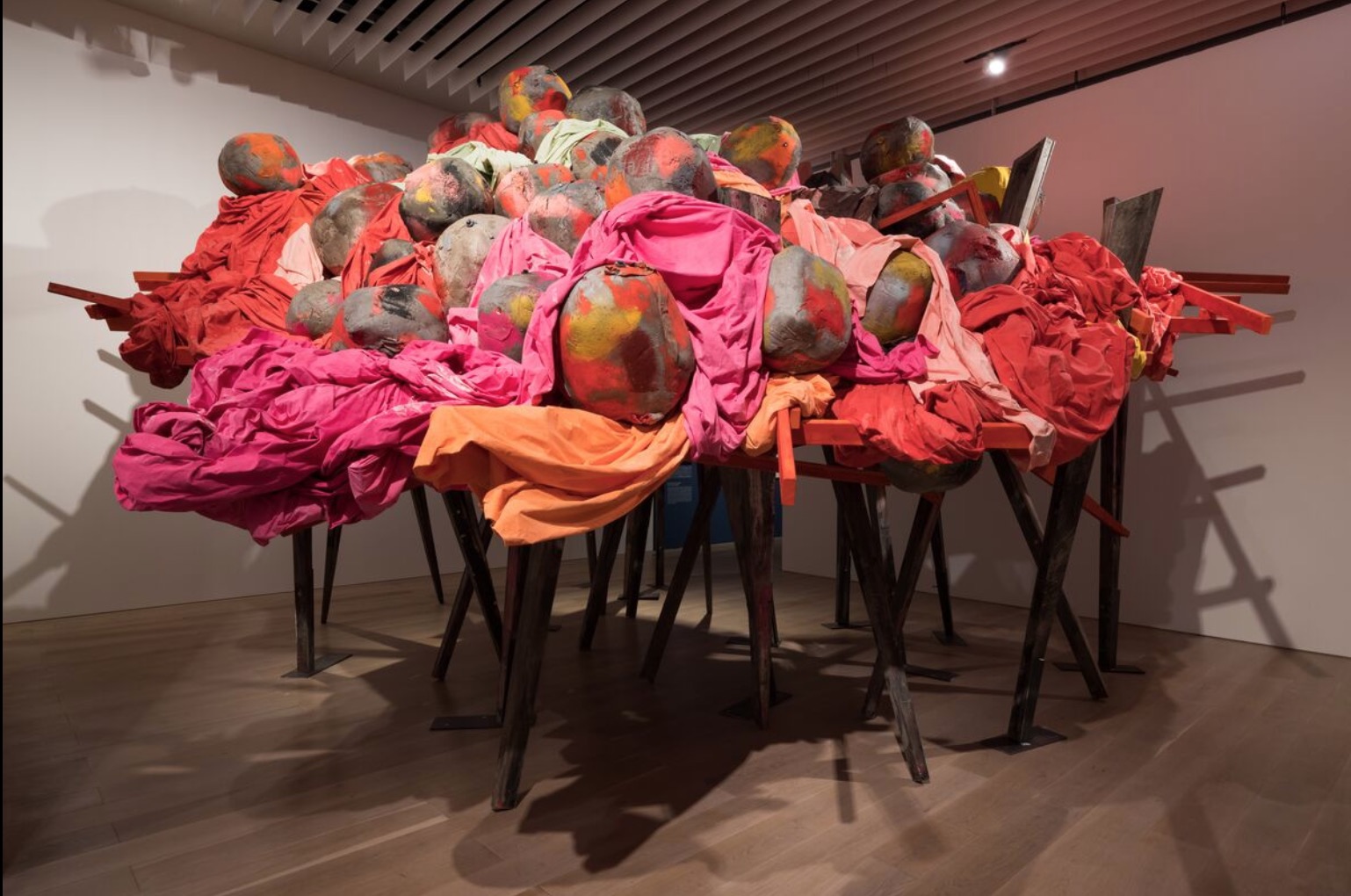 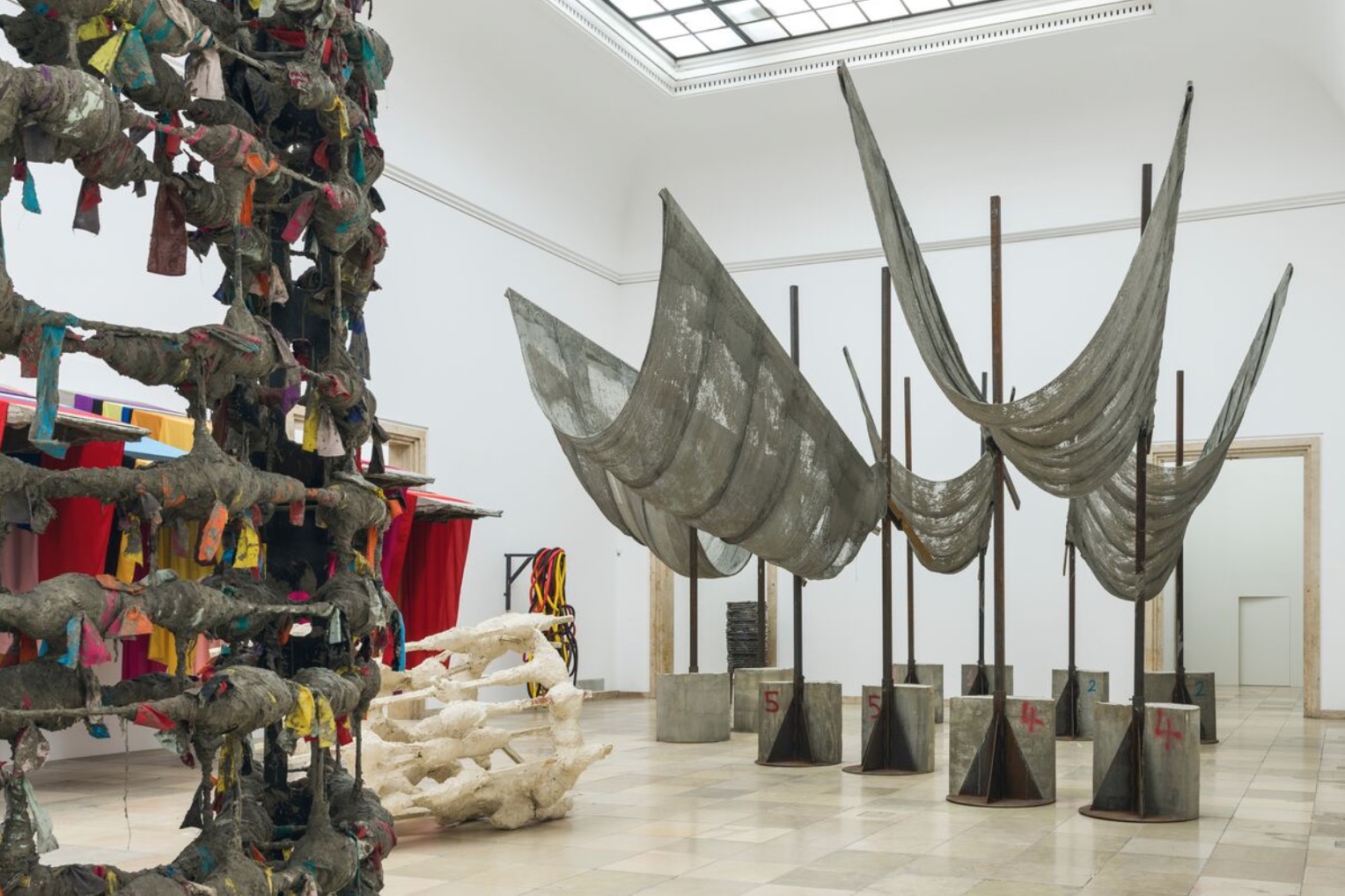 British artist Phyllida Barlow has continuously challenged the conventions of sculpture. Infusing humble materials such as cardboard, fabric, plywood, and cement with a boundless energy, she persuades the viewer to experience form on its own terms rather than to reflexively project meaning onto it. ‘glimpse,’ the artist’s first solo exhibition in Los Angeles in her celebrated five-decade career, will be an ambitious presentation of new large-scale works assembled on site and in response to the gallery’s physical adaptation of the historic Globe Mills, a collection of late 19th and early 20th century buildings. Here Barlow will respond to, manipulate, and punctuate the distinctive architectural features of the complex with her sculptures, yielding an intimate and confrontational encounter between form, environment, and viewer. Visitors will be encouraged to walk around and under, and look up and over the sculptures. Such interaction is a critical element of Barlow’s work, typical of her longtime exploration of the ways in which sculpture can open the mind to different realms of experience by summoning the body forward.

Parallel to her studio practice, Barlow worked as a teacher for more than forty years before retiring in 2009 from the Slade School of Fine Art, University College London, where she was made Emerita Professor of Fine Art. On the occasion of her first Los Angeles exhibition and in the spirit of her acclaimed pedagogical career, Hauser & Wirth Publishers recently released ‘Phyllida Barlow: Collected Lectures, Writings, and Interviews,’ a publication that brings together 50 texts by Barlow – a diverse array of prose, presentations, reflections on exhibitions, and conversations with art-world luminaries, critics, and fellow artists – from across her esteemed practice. This volume illuminates Barlow’s unique insights and serves as a compelling complement to the works on view in ‘glimpse.’

Barlow has exhibited extensively at international venues, including the 2017 Venice Biennale where she represented Great Britain. Recent solo and group exhibitions include ‘act,’ a site-specific outdoor sculpture at London’s Highgate Cemetery (24 July – 30 August 2021), the major retrospective ‘frontier’ at Haus der Kunst in Munich (3 March – 25 July 2021), and ‘Another Energy: Power to Continue Challenging,’ a group exhibition featuring 16 female artists in their 70s or older at the Mori Museum in Tokyo (2 April – 16 January 2022). Last summer, the artist was commissioned to create the stage design for the Munich Opera’s new production of Mozart’s ‘Idomeneo.’

About the Exhibition
Upon arriving at Hauser & Wirth’s South Gallery, viewers will be confronted by Barlow’s new works – sculptures of such scale and fecundity that they radically transform the environment of the former neoclassical bank building of the Globe Mills complex. On any other day, this grand room, complete with a mezzanine and 21-foot-high vaulted ceilings, may draw viewers’ eyes upward to gaze at the immensity of the space. But through sheer force of imagination and innovation, Barlow encourages viewers to do the opposite: to glimpse, from above on the mezzanine or below on the ground floor, the intricacies and energy of gargantuan sculptural works that deny a prescribed narrative in favor of pure sensory experience. Like a theater director, she dictates viewers’ movement through space, pushing them around forms and into tight passages, drawing them into encounters with other works and unexpected vantage points.

At the center of South Gallery, Barlow will position a sculptural structure reminiscent of a stage – a proscenium for the other surrounding sculptures. Though comprised of cement, this work will be delicate, prohibiting visitors from traversing its seemingly reliable surface. A nearby jumble of stilts will support two staircase-like forms, holding them in a state of entropy. Nearby, a cluster of poles and draped scrim may induce a sense of hazard, but will beckon visitors beneath its wooden posts and skirt of vibrantly painted fabric.

The South Gallery’s mezzanine will host a collection of smaller floor and wall-mounted works, more organic in their construction and suggestive of figuration. This grouping will include a new sculpture that harkens back to a visual trope of Barlow’s practice in the 1990s: a playful form, reminiscent of bunny ears, rests atop a gold base comprised of two cubes. This signature combination first appeared in Barlow’s 1994 work ‘Object for the television,’ which resides in the Tate’s permanent collection.

In the following text titled ‘glimpse,’ Barlow shares a recollection of a moment from her childhood, shedding light on the inspiration for and evolution of the works on view at Hauser & Wirth Los Angeles.