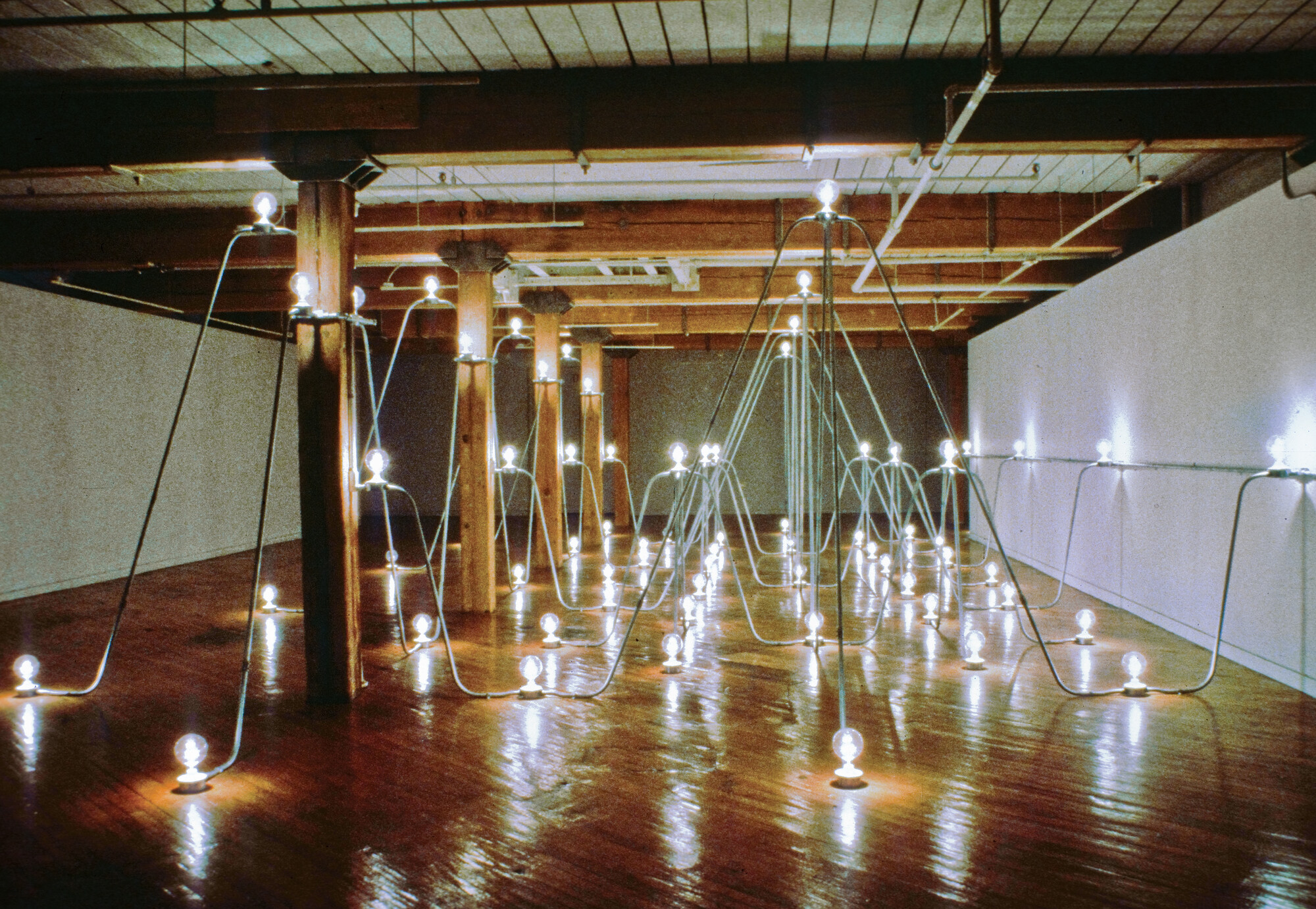 Nancy Holt (1938–2014) was a member of the earth, land, and conceptual art movements. A pioneer of site-specific installation and the moving image, she expanded the places where art could be found and embraced the new media of her time. Across five decades she asked questions about how we might understand our place in the world, investigating perception, systems, and place through experiments with light and language.

The selection of artworks by Holt span 1966 through to 1982 and range from concrete poetry, to photographic experiments with light and shadow, works relating to her iconic earthwork Sun Tunnels (1973–76), and her 1974 video collaborations with Richard Serra, Boomerang and Match Match Their Courage. At the center is Holt’s room-sized installation Electrical System (1982), presented for the first time in more than three decades. One of Holt’s innovative System Works, this network of more than 70 light bulbs connected to a network of arching conduit expanding out from Lismore Castle’s power system makes the facts of the working building perceivable. Holt describes how her Systems Works expose “fragments of vast hidden systems” showing how they are “part of open-ended systems, part of the world.” Within the castle grounds and Lismore town are Holt’s Locators which she noted were “literally seeing devices” simultaneously focusing, extending, and showing the limits of vision.

Holt was attentive to language as a system structuring perception and understanding of place, and her interest in light focused on the built environment as well as earthly and celestial landscapes. The five artists joining her at Lismore Castle likewise open questions about perception. Each artist has chosen works that resonate with their fascinations for Holt’s ideas and artworks.

Matthew Day Jackson’s (b. 1974, USA) Commissioned Family Photo (2013) comprises 82 photographs of the artist and his family taken with a camera designed to record explosions and shockwaves from the extreme light of nuclear detonations. A.K. Burns (b. 1975, USA) presents an evocative film of a total solar eclipse, shot on 16mm in an open field in Nebraska in 2017. Projected on a large angled screen, the scale amplifies the residue of heavy film grain and entanglement of astronomical phenomena, technology, and representation. In the castle grounds Burns’ sculpture The Dispossessed (2018) stand face-to-face, a pair of objects made from mangled and painted chain-link fencing used to mark site boundaries.

Dennis McNulty (b. 1970, Ireland), Charlotte Moth (b. 1978, England) and Katie Paterson (b. 1981, Scotland) respond to the unique architecture of Lismore Castle through their interests in light and language. McNulty’s audiowork Boundary Conditions (2021) maps a network of streets around his home in Dublin, structuring space through verbal description. In the galleries a sculpture extends the power system to spell out lyrics from Bruce Springsteen’s 1982 Atlantic City. On the castle grounds a disc sculpture, Moth’s Blue reflecting the greens (2021) hugs a moss covered boundary wall to project sunlight, while in the gallery Millefleur (Lismore) (2021) fills a circular tower with hundreds of paper leaves. Paterson’s Ideas thread their way through the gallery: short sentences alluding to potential artworks, each involving light. In the gardens, a billboard of Inside this desert lies the tiniest grain of sand (2010) points to Paterson’s interest in scale and technology.