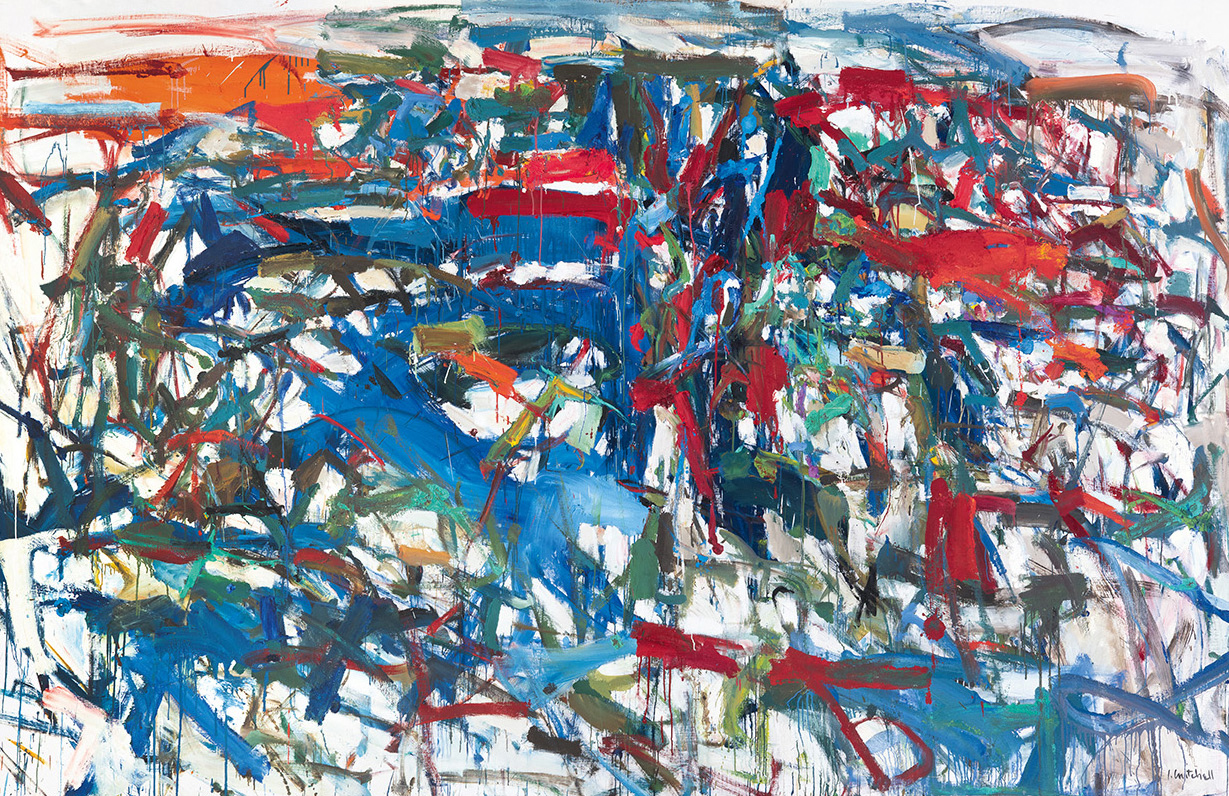 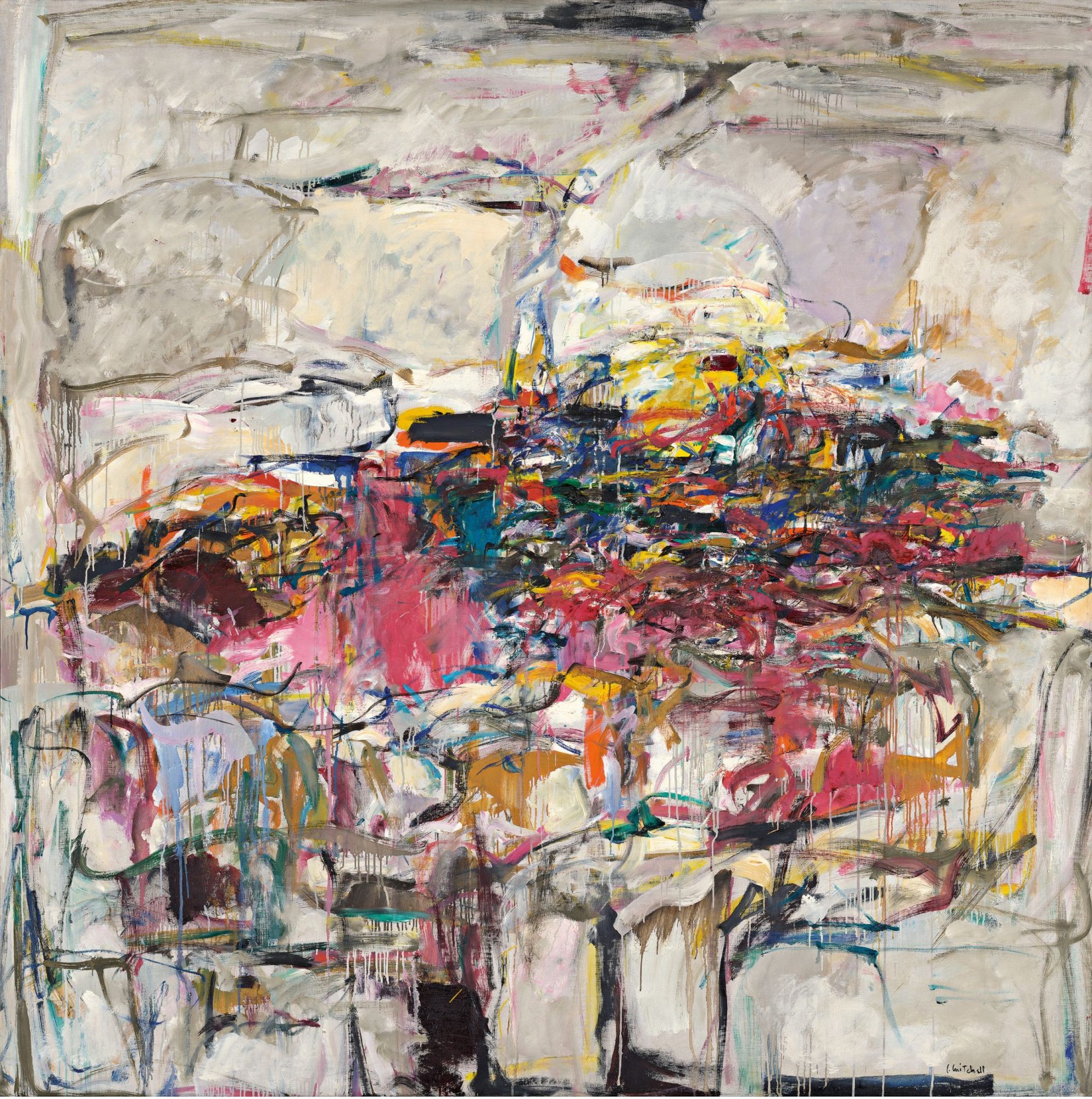 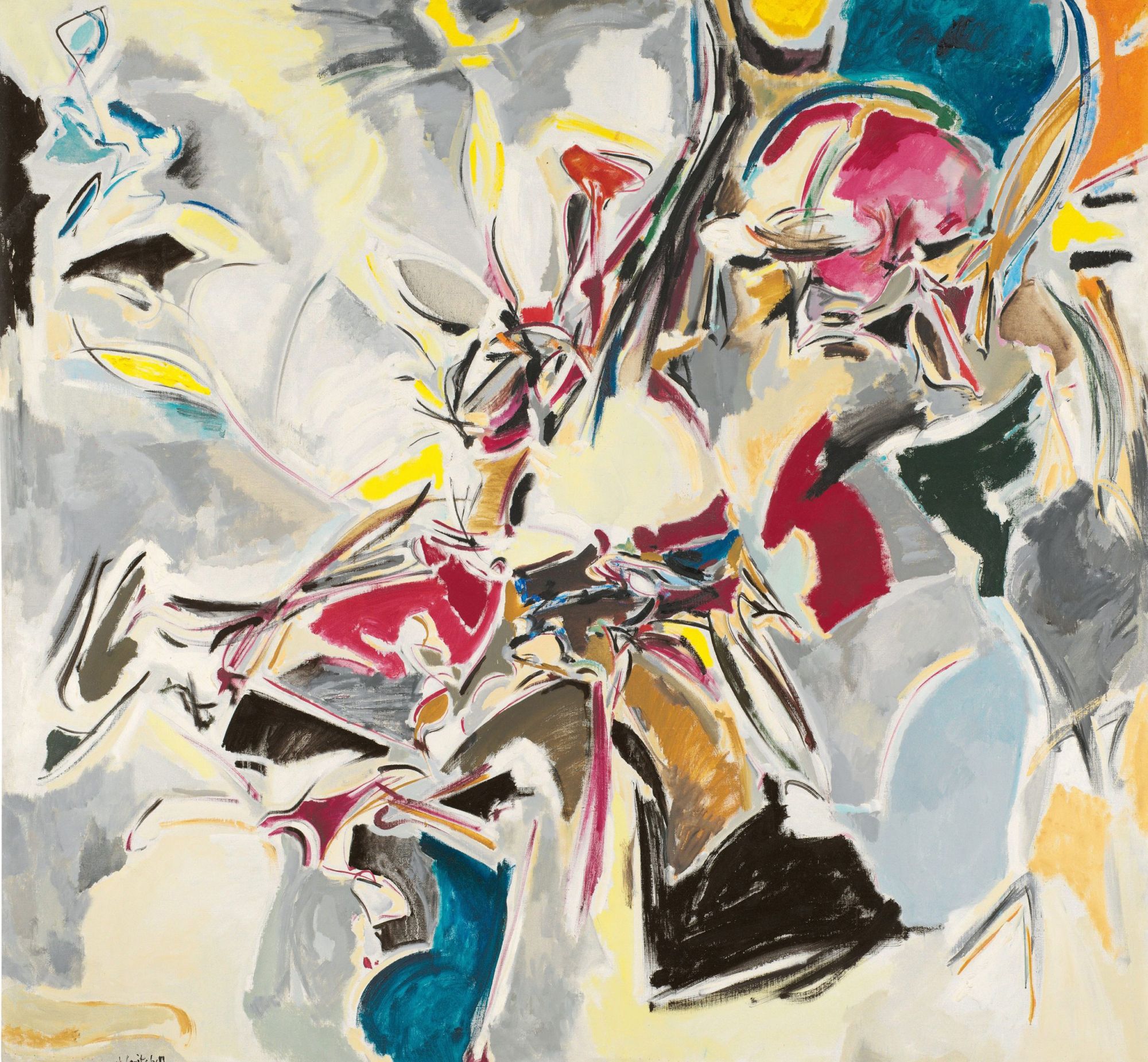 Co-Organized by SFMOMA and the Baltimore Museum of Art, the Comprehensive Retrospective Includes Over 80 Distinguished Works Spanning the Remarkable Artist’s Career

SAN FRANCISCO, CA (February 1, 2021)—Joan Mitchell has long been hailed as a formidable creative force—a painter who attained critical acclaim and success in the male-dominated art circles of 1950s New York. She then spent nearly four decades in France creating distinctive, vibrant abstract paintings that draw on landscape, memory, poetry and music. With its world premiere at SFMOMA from September 4, 2021 through January 17, 2022, Joan Mitchell is a comprehensive retrospective featuring approximately 80 distinguished works. In addition to rarely seen early paintings that established the artist’s career, the exhibition includes colorful large-scale multi-panel masterpieces from her later years. SFMOMA’s presentation will include 10 paintings not traveling to other venues, several from the museum’s own holdings. These works demonstrate Mitchell’s ability to create powerful paintings in widely different scales and her propensity for using bold experimentation to find her way from one major body of work to the next. With suites of major paintings, sketchbooks and drawings as well as an illuminating selection of the artist’s letters and photographs, Joan Mitchell opens a new window into the richness and range of the artist’s practice and reveals the significance of her artistic achievement.

Co-organized by SFMOMA and the Baltimore Museum of Art (BMA), the exhibition is grounded in more than two years of archival research and extensive firsthand review of Mitchell’s works conducted by co-curators Sarah Roberts, Andrew W. Mellon Curator and Head of Painting and Sculpture at SFMOMA, and Katy Siegel, BMA Senior Programming & Research Curator and Thaw Chair of Modern Art at Stony Brook University. After its presentation in San Francisco, Joan Mitchell will be on view at the BMA from March 6 through August 14, 2022. A version of the exhibition will open at the Fondation Louis Vuitton in Paris in fall 2022.

“Mitchell’s glorious paintings radiate with the vitality, feeling and sweeping color we usually experience only in the natural world. On a grand scale, she contended with and remade the possibilities of abstraction, personal expression and landscape,” said Roberts. “After so many months of restriction due to the pandemic and the limitations of art online, Mitchell’s subtle surfaces and moving color will offer visitors a transporting visual experience and remind us of the irreplaceable and overwhelming power of seeing art in person.”

Joan Mitchell explores the artist’s evolution as she sought to unify physical experience with the psychological and emotional. Her works are connected by their incredible evocations of feeling, and her canvases capture the athleticism of her physical process in addition to sensations sparked by music and poetry. A sense of place imbues Mitchell’s paintings, from remembered vistas of Chicago, New York, Paris and the Mediterranean coast, to the pastoral hills of Vétheuil, the village outside of Paris where the artist eventually made her home. The power of her approach can be seen in vibrant responses to the urban environment of New York City in paintings like The Bridge (1956) and Evenings on 73rd Street (1957), as well as rural French landscapes in paintings like South (1989), and also in works that engage with the legacy of Vincent van Gogh, such as No Rain (1976) and Sunflowers (1990–91). Co-curators Roberts and Siegel note in the exhibition catalogue, “For Mitchell, a painting with feeling embodied largeness of purpose: to encounter the world with honest emotion and sensation. Mitchell recognized this impulse as the driver of a grand tradition that included van Gogh, Paul Cézanne, Claude Monet, Franz Kline and Willem de Kooning; she both embraced that tradition and expanded its terms.”

“Across her life, Mitchell experimented with how painting could embody physical experience and also the complexity of the inner self. Ultimately, she sought to get beyond the boundaries of that self to connect with the world: a poem, passage of music, a dog—even a tree. Her fearlessness in making both grand and small gestures resulted in works that inspire us to connect to our feelings and bodies, to nature and to other beings,” continued Siegel. “She challenges our ideas about great art. Mitchell was not simply ‘making it’ in an environment created and occupied by men, she was actively remaking painting and its possibilities. The exhibition and the book reconsider the art of the postwar era and the extended impact of feminism’s burgeoning possibilities in the 1970s and ‘80s—thinking through what it means to live a life with art at its center.”

The exhibition highlights the way Mitchell experimented with color, light and gesture, resulting in a singular visual vocabulary that was decidedly personal and abstract, but also grounded in external reality. The scale of her works, the views they express and the materials she used were all impacted by places where she lived, worked, and visited and the people around her. Photographs of views that inspired Mitchell will be shown alongside her painterly responses, capturing the way she maintained a connection to the natural world and to everyday life, moving beyond the conventional definitions of both Abstract Expressionism and landscape painting. Sketchbooks, drawings, letters and other archival materials will shed further light on the artist’s process and perspective.

Music and poetry were ever-present in Mitchell’s life and impacted the development of her artistic practice. Early on she committed herself to the visual arts, yet her love of poetry and music found form in her paintings and her personal and collaborative relationships with writers and musicians in both the U.S. and France played essential roles in her career. As her artistic style developed the open-ended, sometimes ambiguous, and often personal nature of lyrics, lines of poetry and musical compositions dovetailed with painting’s capacity to express what cannot be named or explained. Two multi-panel paintings, Ode to Joy (A Poem by Frank O’Hara) (1970–71) and La Vie en Rose (1979), demonstrate Mitchell’s passion for the arts across many disciplines and the way it propelled her practice.

Lastly, the exhibition contextualizes the ways in which social dynamics shaped perceptions of and possibilities for Mitchell and her work. Throughout her life, the artist grappled with the conflict between the social roles prescribed by her gender and social status and her desire for true creative freedom. Eventually, the artist came to see herself as a “mauvaise herbe,” or weed. To her, dandelions, daisies, even sunflowers were weeds—plants that might be overlooked, seen as unruly or out of place according to convention, but perhaps beautiful, strong and persistent when seen by the right eyes. The transnational nature of Mitchell’s existence is yet another way she defies easy categorization. Over the years, both New York and Paris claimed her, and vividly different perceptions of her work in the U.S. and France developed. Joan Mitchell examines these diverging views and reconciles them into a cohesive portrait of a complex individual and the outstanding art she produced.

ABOUT JOAN MITCHELL
Joan Mitchell (1925–1992) was an American artist whose career spanned more than four decades in the U.S. and France. Best known for her large, abstract oils on canvas, Mitchell also created smaller paintings, as well as an extensive body of works on paper and prints. Born in Chicago and educated at the Art Institute of Chicago, Mitchell moved to New York in 1949. In 1955, she began splitting her time between Paris and New York, before moving permanently to France in 1959. In 1968, Mitchell moved from Paris to Vétheuil, a small village northwest of the city, while continuing to exhibit her work in Paris, New York and around the world. In Vétheuil, Mitchell began regularly hosting artists at various stages of their careers, providing space and support to develop their art. When Mitchell passed away in 1992, her will specified that a portion of her estate should be used to establish a foundation to directly support visual artists.

CATALOGUE
The exhibition is accompanied by a lavishly illustrated catalogue published by SFMOMA in association with Yale University Press that offers a sweeping scholarly account of Mitchell’s career and the transatlantic contexts that shaped her work as an artist based in the U.S. and France. In addition to chapter essays authored by co-curators Roberts and Siegel, in-depth essays by scholars Éric de Chassey, Jenni Quilter and Richard Shiff present new historical models for understanding Mitchell’s work in relation to mid-20th-century painting in Paris, poetry and 19th-century French Romanticism. Presenting groundbreaking research and a variety of perspectives on her art, life and connections to poetry and music, this unprecedented volume also includes artistic and literary responses to Mitchell’s work by writer Paul Auster, composer Gisèle Barreau, poet and essayist Eileen Myles, artist Joyce Pensato and painter David Reed in dialogue with conservator Jennifer Hickey. The first major scholarly publication on Mitchell in decades, this book is an essential reference for Mitchell’s admirers and those just discovering her work. The cloth-covered 10” x 11.5” publication comprises 384 pages with 350 color and black-and-white illustrations and four gatefolds.

ORGANIZATION
Joan Mitchell is co-organized by the San Francisco Museum of Modern Art and The Baltimore Museum of Art.