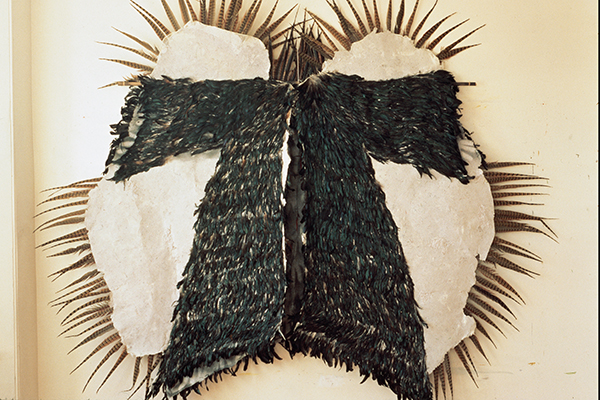 Carlos Villa: Worlds in Collision is the first museum retrospective of iconic Filipino-American artist Carlos Villa and is presented as a joint exhibition at both the San Francisco Art Institute and Asian Art Museum.

An alumnus and longtime SFAI faculty member, Villa (1936-2013) is a legend in artistic circles for his groundbreaking approaches and his influence on countless artists, but remains little known to many fans and scholars of modern and contemporary art.

Villa was inspired by the late 1960s Third World Liberation consciousness in the Bay Area and radically changed his approach to artmaking to reflect non-western perspectives. The exhibition illuminates the social and cultural roots, as well as the global importance, of Villa’s art and teaching career as he sought to forge a new kind of art-world inclusion that reflected his own experience, commitment to diversity, and boundary-bending imagination.

The full arc of Villa's six-decade career will be on display at SFAI, while the concurrent presentation at the Asian Art Museum features large-scale artworks Villa created in the 1970s.

Carlos Villa: Worlds in Collision is the result of a partnership between SFAI and the Asian Art Museum, including curators Abby Chen, head of contemporary art at the Asian Art Museum, Trisha Lagaso Goldberg (SFAI), and Mark D. Johnson (San Francisco State University). The exhibition is accompanied by an original, fully illustrated catalogue published by the University of California Press with major essays by renowned scholars including Patrick Flores, Luis Francia, Theodore Gonzalves, Paul Karlstrom, Lucy Lippard and Margo Machida.

About Carlos VIlla
Carlos Villa (1936–2013), born and raised in San Francisco, studied at the SF Art Institute with, and became close to, fellow artists Joan Brown and Manuel Neri. He also befriended Bruce Conner, and showed in Conner’s Rat Bastard Protective Association show. He spent 6 years in New York exploring an abstract style, showing with his cousin Leo Valledor before returning to SF in 1969. In California, Villa shifted away from his largely minimal practice, embracing his lived experience and identity as a man of Filipino descent as essential to his work. In 1969, he became an instructor at the San Francisco Art Institute, where he practiced and taught as one of the first post-war artists to actively incorporate cultural motifs and materials into his paintings, sculptures, and performances. A dedicated educator, he launched the project “Rehistoricizing Abstract Expressionism in the San Francisco Bay Area, 1950s–1960s,” which publicly highlighted the contributions of women and artists of color working alongside the likes of Elmer Bischoff, Richard Diebenkorn and David Park. His work was recently featured in the Berkeley Art Museum’s exhibition “Way Bay” that featured a symposium on "Worlds in Collision”, his influential series of exhibitions, symposia, curricula and publications from 1976 until his passing in 2013. Villa has won several awards, including a Pollack-Krasner Foundation grant, a National Endowment for the Arts grant, the Distinguished Alumni Award from the San Francisco Art Institute, the Rockefeller Travel Grant, and the Adaline Kent Award. The 2019 Singapore Biennial will feature Villa’s work as a precursor to and central to concerns in contemporary Asian art.

About the Curators
Mark Dean Johnson is Professor of Art at San Francisco State University, and co-curator of the Carlos Villa retrospective. He worked and collaborated with Villa at SFAI and elsewhere. Johnson is the Principal Editor of Asian American Art: A History, 1850-1970 (2008: Stanford University Press), and co-curator of projects including Changing and Unchanging Things: Noguchi and Hasegawa in Postwar Japan (2019: Isamu Noguchi Museum and Sculpture Garden/UC Press); Chang Dai-chien: From Heart to Hand (2019: Asian Art Museum) and Asian/American/Modern Art: Shifting Currents, 1900-1970 (2008: de Young Museum/UC Press).

Trisha Lagaso Goldberg is an artist, independent curator, and community arts leader. She is co-curator of the Carlos Villa retrospective and curator of the contemporary art component of the exhibition on view at the Asian Art Museum. She worked with Villa on numerous projects, including the San Francisco Babaylan: Sister City Sisters exhibition which they co-curated for the Museum ng Maynila and SFSU Fine Art Gallery in 1998. She has held leadership positions in higher education, nonprofit and public art at notable institutions such as the San Francisco Art Institute, Southern Exposure, and the Hawai’i State Foundation on Culture and the Arts.